Since early 2021, there has been much talk about the Great Resignation, Big Exit or Big Quit. The assumption is that the pandemic has induced employees to reflect on their work and careers, and that many have concluded to change jobs. Recently, we have seen other experts refuting this idea, stating how macro data on turnover does not support it.

What can you do to check on a micro-level whether a Great Resignation takes place at your organization? In this short article we show you a step-by-step approach for a basic analysis.

Defining Turnover in the Light of the Great Resignation: Voluntary vs. Involuntary

The first step is to gather your turnover data. You can look at monthly or annual turnover. There are dozens of ways to calculate it. The most important thing is to have a consistent definition so that you can properly analyze over time. 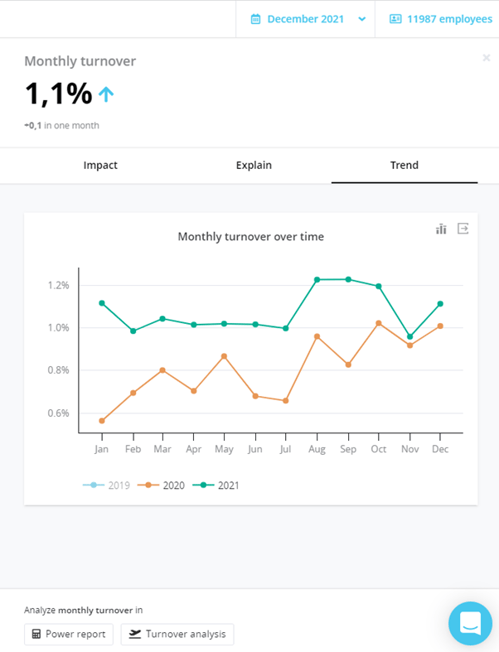 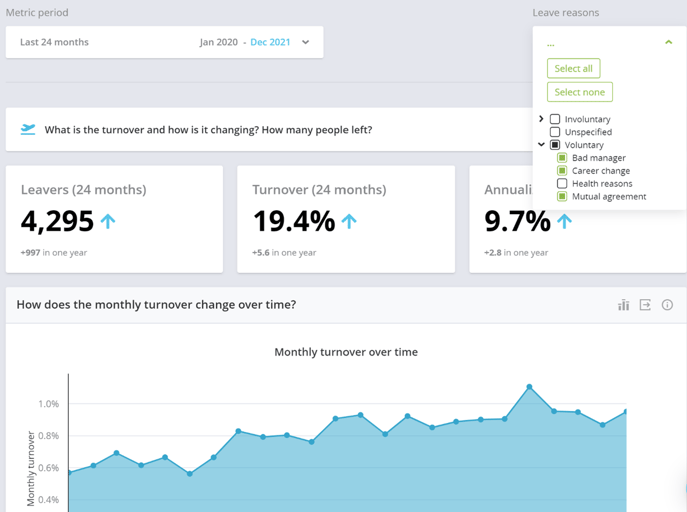 For a deeper understanding of why people are leaving voluntarily, one should take leave reasons into account. This information is typically asked in exit interviews and otherwise managers or HR likely have an idea of why an individual employee chose to leave. For analytical purposes, this information should be registered in your systems.

In the ideal case that an organization has registered leave reasons, one can do some further digging. Theoretically, any leave reason can be put under the Big Exit, but in principle the assumption of the phenomena is that people have started to revalue work and career. Do you see a spike in reasons such as “career change”, “work life balance”, or “working conditions”? Then the Big Exit seems to have entered your company. Do you see company-specific leave reasons such as “unhappy with upcoming merger”? Then the story is probably more nuanced.

2020 was an a-typical year. In some countries, such as the US, involuntary turnover rose significantly in the first months of the pandemic as people were fired when companies suffered, returning to pre-pandemic levels in the second half of the year (on a macro level). Conversely, in some Western European countries, where companies that suffered received government funds to keep their employees in service, voluntary turnover was actually lower all along 2020 as people did not want to take the risk of moving in such an uncertain time.

As a result, current annual turnover, whether it is voluntary or involuntary, could differ from 2020, but one should be careful with making hasty conclusions. To compare apples to apples (to the extent that’s possible), you should look at the long-term trend, also taking account of 2019 and earlier years. Do you see that it is higher now than in the same months in 2019 and 2018? A bit higher, or significantly higher? And how can it be explained? Is your company restructuring? Or are people leaving because of the assumptions related to the Big Quit phenomenon? This can be analyzed by distinguishing between voluntary and involuntary turnover, and by looking at leave reasons. 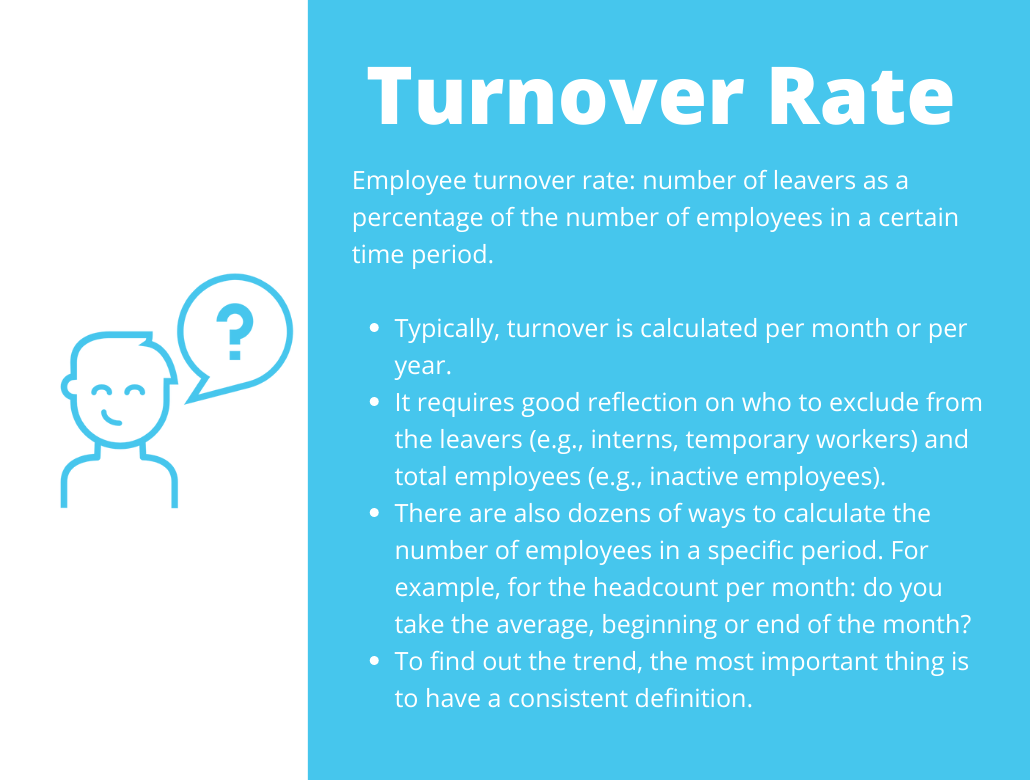 The Great Resignation represents the general idea that many employees have reflected on work and concluded to change jobs. In that sense you would expect it to happen across your organization rather than only in specific parts. Still, it makes sense to examine where in your organization turnover takes place. Do we see it all over? Or only in specific business units, functional areas or job grades? Do we see a difference between gender? Whether company-wide or concentrated in pockets, a spike in voluntary turnover is generally problematic. Still, to address it, we should know whether it is caused by a Big Quit or by another reason. For example, if turnover is high in a specific functional area, it could have something to do with business changes or leadership performance in that area, but not with the Big Exit phenomenon.

The previous analysis should give you an idea whether your organization is struggling with rising turnover. Additionally, it should help you determine what is causing that turnover and, with that, how to mitigate it. This second part depends a lot on the data that you have available. Even if you have concluded that no significant changes in turnover trends took place at your organization, this analysis should still have helped you to better determine where and why people are leaving, and have convinced you (if you weren’t already) to monitor employee turnover regularly.

At Crunchr, we value input from our community.
If you wish to read more about a certain topic, please drop us a message.

Our content creators are open to any suggestions related to HR, People Analytics, and Strategic Workforce Planning.

Learn how Crunchr can help you achieve real business value

Technology, big data and analytics have become important items in the strategic decision-making...

Nowadays, there numerous articles and insights to find about people analytics. At Crunchr,...

How the evolution of HR into an analytically driven profession has made way for workforce...